6 Ways to be a Better Ally 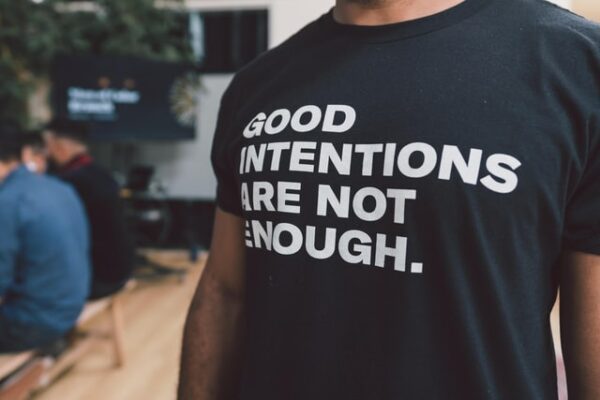 -Assume you have it

-Listen to experts about it

-Be willing to change your life to end it

It’s that last point that lingers with me.  What can white people do, right now, to be allies in accompanying siblings of color?

Dr. Shannon Craigo-Snell, a professor at Louisville Presbyterian Theological Seminary, together with Christopher J. Doucot, has co-written No Innocent Bystanders: Becoming an Ally in the Struggle for Justice.

Connect with people already addressing the problem. “Whatever issue is pulling on your spirit — people who are houseless or hungry, issues in the justice system or educational access — there are people …  who have been working on that for a long time.”  Connect with them.

Listen to others’ voices, and “instead of inserting your own voice, repeat theirs with citation in the spaces you have access to.“ Pepper social media posts with the same goal in mind: “Let me retweet that with citation to help it reach a larger audience.”

Another suggestion from Craigo-Snell:  Start filling your bookshelf and social media feed with the voices of Asian, Black, Latinx, trans and queer authors, “and not just about racial issues,” she says. “At the end of the day I want to read a formulaic mystery novel.” As it turns out, “people of color and queer people have written formulaic mystery novels. Read books by people who don’t look like you.”

“Call your [elected] representative and say, ‘I’m paying off a mortgage at this address and I would like you to vote this way.’” Talk to teachers and principals about the textbooks being used in the classroom. “The rooms you have access to,” she said, “are the places you can amplify voices and advocate.”

This potentially life-saving practice got its start in Latin American countries under oppressive regimes. “It was good folks in North America who wanted to help” by accompanying people in danger, she says. “A white body with an American passport can help assure disappearances won’t occur.” A word of caution, she says: “The spaces where you put your body are uncomfortable and possibly dangerous.”

Here Craigo-Snell is thinking of something akin to the Impedimenta jinx used by Harry Potter and friends to slow down those who would do them harm. “It can be important to impede the process of injustice,” she says. A well-known example is the Sanctuary Movement, which “slows down the process until the legal work can be done.  There are ways we can impede justice in moments where it’s not ethical not to.”

Craigo-Snell points to the example of Pride: “people celebrating being gay, doing it flamboyantly and joyfully.”  Injustice “is based on fear,” she says. “Joy is the opposite of fear. Food, dancing, and silliness break down barriers.”

What is one way you can act as an ally?