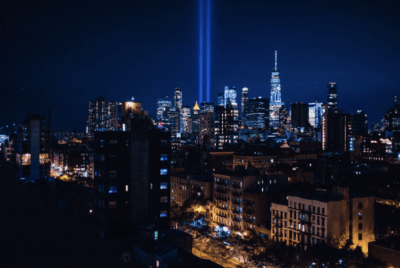 Anniversaries are a crazy thing.  They can be reminders of some of our happiest times or a recurring connection to less pleasant memories and some of our hardest days. Most of these days live only in our personal planners, circled, or starred or etched into our memories. There are some, however, which are there for all of us who lived them.  For previous generations, these are the infamy dates or the dates a president died.  From my childhood, it was the day of Challenger and President Reagan’s touching speech which both inspired me and made me cry then… and still.

This week brings one of those anniversaries. Twenty years ago, on a beautiful and glorious Tuesday morning, an event occurred as unexpected and shocking as anything ever experienced in this nation, maybe even the world, brought into our homes and offices by a torrent of news coverage, live, as it happened. But this is also a dual memory—one that is part of my personal story, but also a part of our collective story as well.  And it also happens to be my birthday.

I was asleep when it started.  I had worked the night before and had been home just a couple of hours.  We had a very busy night and it had not slowed down until the final few minutes of the 12-hour shift. I was about 10 months into what would be a nearly fifteen-year career with the New York City Fire Department.  At the time, I was assigned to our Brooklyn Communications Office, one of five offices in the city tasked with answering, dispatching, and coordinating the fire department response to emergencies of all types across the city—around 500,000 per year.  In FDNY, Dispatchers and Supervisors are tasked with doing everything from moving resources around the city and coordinating mutual aid to making sure that the ancient but functional call boxes on the street corners work properly.

Just before 9AM on September 11, 2001, an alarm from that system and a radio report from a unit operating nearby the World Trade Center on a gas leak were the beginning of what we now know simply as 9/11.  That day is our own December 7, no matter where you were. But for those of us who were there, it is more than a memory—it is a cornerstone and will always be so.

A little after 10AM, I woke from my exhausted sleep to the sound of sirens that just would not stop and turned on my TV to see a grainy image of a place where towers used to stand and fuzzy letters: “WORLD TRADE CENTER ATTACKED AND DESTROYED”.  The next letters on the screen ordered all FDNY and NYPD personnel to work, but that was unnecessary—I was already getting ready. It was only later, on the street headed to work, that I looked up and saw the smoke.  That smoke alone—a hurricane of black and debris angrily swirling over the city was breathtaking and terrifying but that and so many other terrors are not what I remember most about that day.

But why?  When I look back there certainly are horrors and sadness, and someone could be easily forgiven for thinking that memories of the worst of that day are what matter.

There is another side of the story—one I think is more important, especially today. I see 9/11/2001 as a day of miracles.   I saw firsthand that the women and men of New York’s Fire and Police Departments, assisted by so many others, saved over 20,000 people in the largest emergency evacuation of its kind in American history. I know people I knew who went into buildings they knew were likely to collapse to do what they could.  I knew that every one of my coworkers did everything they could, largely without ever being asked.  Whether that meant talking to people trapped in towers with grace and kindness, people who would not be saved, or meant being part of the collective team tasked with helping the city through the crisis, a process that lasted far longer than the news coverage, and far past when most of the world stopped paying attention. Whoever it was, everyone contributed, everyone found their role to play.  I made it back into work a couple of hours after the incident started, and everyone I worked with made it in too.  Only, sadly, far too many never went home.

But it wasn’t just inside the fire department or the police department. As New Yorkers we were able to see what our City was capable of, and, honestly, people far beyond the City too. From the hastily arranged fences with pictures at Union Square Park to the true kindness that strangers expressed for each other, it was as though the same spirit of selflessness and sacrifice exhibited by the 343 firefighters we lost had ebbed out into the greater population and motivated an incredible collective shift towards our best possible selves—as a community.

It’s the same spirit that can be felt at a field in Shanksville or seen in the photos of that day from the Pentagon or which was experienced in that small Canadian town that housed stranded tourists. It is the highest version of us and, sadly, it is also the rarest.

One of our greatest human faults is that it takes a 9/11, or December 7th to unlock the portion of us that can move beyond seeing the “other” to being the “one”.

For those few short months after 9/11 we held onto it, at least in New York.  But to return to normal meant to let that go and so we did.  Grunting at each other on the subway, being far more terse than necessary to the waiter, and focusing back on our own important journey in the world with too little regard for those beside us.

But today, twenty years on, I can say without question that I have seen the possibility in our divine selves. I have known, just for a brief time, what it looks like when we get a little closer to being who I believe God has made us to be. If there is a sadness as I turn these pages of the calendar, and if there is a sadness in my memory, it is only because of how rare that vision is.  But I thank God that I was able to see it, even on such a horrible day, and that I can choose to remember it still.