Abortion is a hard issue for Christians.

Some Christians are calling it an answer to prayer. Others feel grief and provocation and threat. The reality is that we who call ourselves Christian often decide whether abortion should remain legal or not based on our faith.

My experience on this issue is that people of good character may differ. We’re all on the side of life and we have different interpretations about what that means.

In 2019, the Reverend Dr. J. Herbert Nelson, II, Stated Clerk of the Presbyterian Church (U.S.A.), wrote about the denomination’s decision to become pro-choice.

As Presbyterians, we are part of a church that has wrestled with this issue for decades, guided by actions of our General Assemblies on the matter. Perhaps the most important action was taken by the 195th General Assembly (1983), which addressed abortion in the context of the plight of women who had limited access to medical care during pregnancy, or who did not feel they had the resources to raise a child.

At the center of that approach was the effort to respond to the 1973 decision of the U.S. Supreme Court referred to as Roe v. Wade. It provided a legal framework to guide those trying to make responsible decisions regarding the possible termination of a pregnancy and it affirmed in the strongest terms the constitutional right of a pregnant woman to decide procedures and outcomes that involved her own body.

Broad Street Presbyterian Church has a history of being pro-choice. For years NARAL, the National Abortion Rights Action League, had their Columbus office in our building.

I am a pro-choice pastor.

I have volunteered with The Religious Coalition for Reproductive Choice (faithchoiceohio.org in Ohio) as an All Options Clergy Counselor for over 25 years. I have talked and sat with women from many churches in the Columbus area, as well as girls and their mothers. I have heard their stories and witnessed their struggle as they have decided how to move forward with the news of an unintended pregnancy.

Our Stated Clerk concludes his letter with these words:

As this matter grows in prominence in the news and possibly within our church communities, may we all be mindful of both the integrity of women and physicians who are at the center of the controversy and may we be more responsible in nurturing the life that is already among us.

After years of listening to women, both in San Diego, California and in Columbus, Ohio, no woman in a congregation I’ve served has come to me to wrestle with this issue.

Which illustrates how private the issue of abortion ultimately is. How personal.

who have walked this way before us,

who have carried their feelings and fears…

through whatever lay ahead of them. 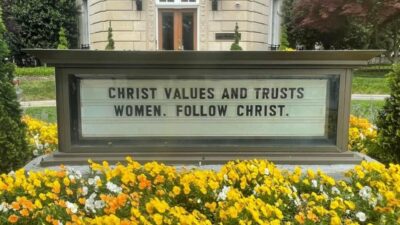