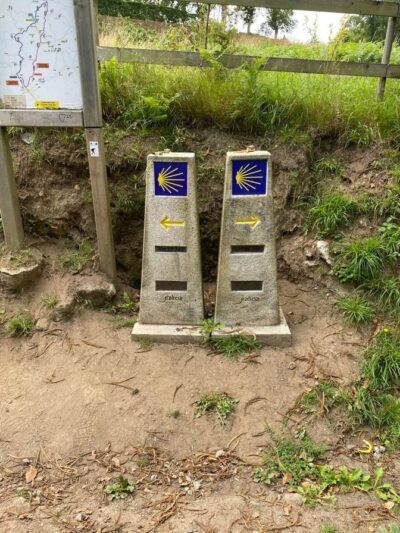 I recently returned from a pilgrimage in Spain.  For a two-week period, I joined my daughter, Sarah, in walking part of the Camino del Norte along the northern coastline, from Aviles to Santiago de Compostela.  We were pilgrims.  We carried backpacks, used trekking poles, stayed in auberges, which are public and private hostels, and learned to trust “the way,” as each of the 12 Caminos is called.

Along the way, we depended on scallop shells for direction.  Often we’d see a concrete post with a yellow shell symbol.  Or a lone yellow arrow.  Or both.  The symbols and arrows were uncanny in appearing just when we needed them.  As if more than a few pilgrims had followed this way before!  Over time, I came to trust that when I wondered what direction to go next, the way would become clear.  What a metaphor for approaching our lives; trusting that as we walk, our direction will become known.

Except when we’re offered two paths!  The photo above shows one of several times when we pilgrims were given an option for our next step.  We could choose a longer, more difficult route.  Or a shorter, easier route.  On long days of hiking, the shorter, gentler route inevitably won out.  But what about when the choice was between a harder, shorter route or a longer, easier one?  We weighed the descriptions and kept walking.

In the Book of Acts, Christianity is described as “the Way” (Acts 9:2; 19:9, 23; 22:4; 24:14, 22)  Less a set of beliefs, more a way of trusting the One who companions us along the way.  These days, in the midst of a pandemic that isn’t showing signs of abating, we struggle to adjust to our new way of life.  Regardless of constrictions placed upon us, we are still on “the way.”  The sacred is everywhere.  Awakening continues.

How do you choose between two paths?