A Sculpture That Affects Us All 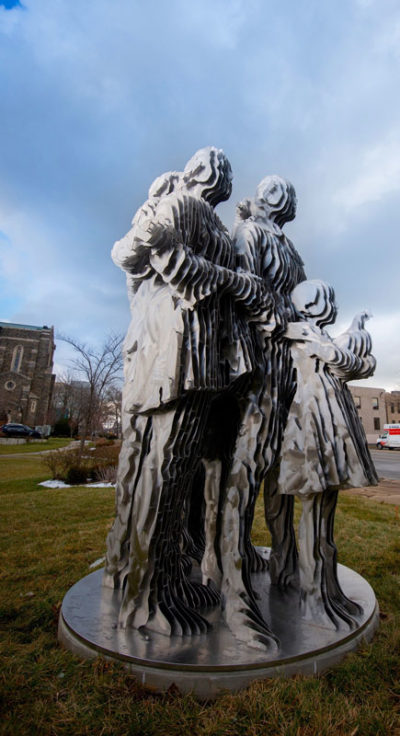 The new sculpture at 444 E. Broad Street is Voss-Andreae’s latest striking large-scale piece, blending figurative sculpture with scientific insights into the nature of reality.  When viewed head on, we see right through the piece, to the city behind it.  Prior to his art career, Julian Voss-Andreae studied quantum physics and philosophy.  His passion for the mysteries of quantum physics continues to inspire his work.

The sculpture’s title, “Our Single Garment of Destiny” refers to a line found in Dr. Martin Luther King Jr’s “Letters from a Birmingham Jail,” from 1963.

Moreover, I am cognizant of the inter-relatedness of all communities and states. I cannot sit idly by in Atlanta and not be concerned about what happens in Birmingham. Injustice anywhere is a threat to justice everywhere. We are caught in an inescapable network of mutuality, tied in a single garment of destiny. Whatever affects one directly, affects all indirectly.

Andriana and Julian Voss-Andreae envision the sculpture, with its quantum wave-like structure, as a dual metaphor.

As viewers walk around this three-ton masterpiece of public art, we see it “disappear” before our eyes.  One of First Congregational Church’s pastors, Tim Ahrens, writes:

There are so many women, men, and children who become invisible to us. They seemingly disappear.  They are often homeless and hurting, different and diverse, mentally ill or struggling before our eyes, forgotten and often forsaken. (FCC Reflection, 1-15-21)

Art offers healing power in our lives.  May “Our Single Garment of Destiny,” at the corner of Cleveland Avenue and Broad Street, touch all who see it, and move us to more fully perceive how whatever affects one of us directly affects all of us indirectly.

Gaze at “Our Single Garment of Destiny,” via the picture, through the video link below (listen as poet Barbara Fant walks around the sculpture at 23:37-25:56) or by driving downtown and seeing the sculpture for yourself.  Share your response in the comment section of this blog.